We were thankful we made it out of of Canyonlands National Park in one piece, even with a flat front tire. After having the issue fixed at a local auto service the next morning,  we headed out of Moab and drove the lengths of US Highway 191 and later linked with US Highway 163 in the hope of reaching the town of Springdale, Utah before the night falls.

My husband, who is behind most plans of this road trip, was just as stunned and as thrilled as I was when we realized that we were indeed passing through the undoubtedly most iconic rock formation of the American West – the one and the only Monument Valley!

Monument Valley, which is not a national park nor a national monument, is known to the Navajo nation as Tsé Biiʼ Nidzisgaii (pronunciation in the audio below), which literally translates to “rock(s)—within—white-streaks-around, or thereabout”. Those white streaks that go around in the rocks is exactly what we see in the various rock layers in this world-famous Valley.

These iconic rock formations have been featured in numerous movies, including the movie Forrest Gump.

We were simply passing through and regretted not having more time to spend at Monument Valley, but who knows what more surprises await us in the future? 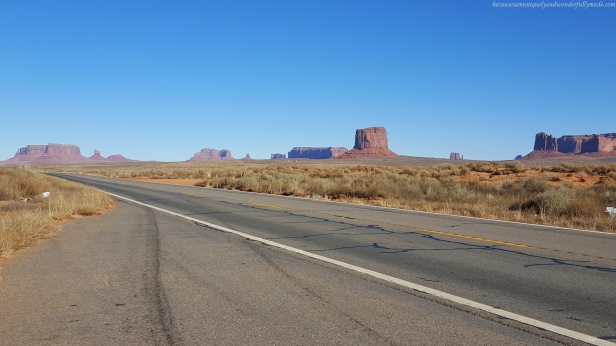